Manager Bullets is resorting to publicity stunts to promote his client Sugar Kane’s latest release, the latest stunt being for her to skydive into the ocean in front of a bunch of unsuspecting surfers who would have to save her, the actual parachutist being experienced Bonnie, working for Big Drop, only masquerading as Sugar. The ruse works as Frankie truly does believe he saved Sugar. This act turns the surfers’ collective attention to want to try skydiving, the who’s including Frankie’s girlfriend Dee Dee wanting to demonstrate her girl power. Dee Dee’s motivation changes when it looks like Bonnie is trying to steal Frankie away from her, while in reality Bonnie is only trying to make her partner, the pilot Steve, jealous. Another of the surfers, Bonehead, has fallen in love, all believing his cryptic talk means that it’s Sugar who is the object of his affections, while in reality he has fallen in love with Lorelei, he not wanting to sound crazy in not telling anyone that she is a mermaid. The situation gets more complex as bumbling Eric Von Zipper, the head of a biker gang called the Rat Pack, the surfers who are the bane of their existence, wants to kidnap Sugar as she is Von Zipper’s idol. 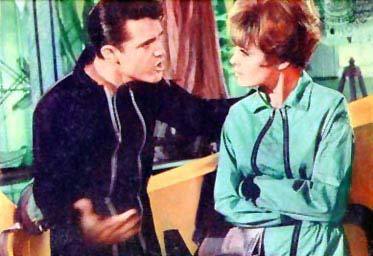